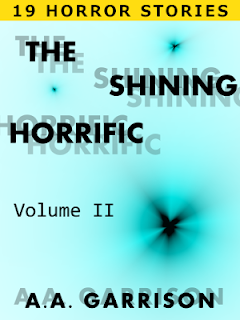 Lulu  Createspace
Posted by A.A. Garrison at 8:53 AM No comments:

Yet another new eBook from A.A. Garrison: The Shining Horrific: A Collection of Horror Stories, Volume I 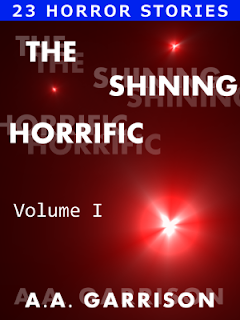 
Author A.A. Garrison has a knack for horror, as this collection of stories attests. Not fitting comfortably in the realm of “psychological” or “intelligent” horror, his brand of the macabre falls into a subtler niche, one that might be considered “darkly radiant.”

Call it “the shining horrific,” if you must have a label.

Included amongst these 23 tales:

And many more. Ranging from flash fiction to novelettes, from the quiet to the messy, from the everyday to the fantastic, the stories in The Shining Horrific cover a diverse literary terrain, sure to please any audience.

Now, come explore that twilight country of the shining horrific ...


Buy the eBook, read reviews, and get samples at these vendors: 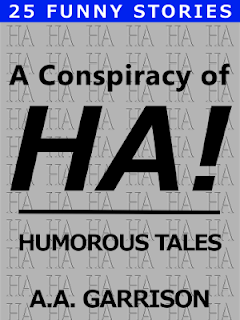 
“Laughter is a form of redemption.”

This is the credo of author A.A. Garrison, applied liberally to these stories in ‘A Conspiracy of HA!’ Under it, anything goes.

Earwax-loving aliens. Eyeball-chewing pets. Instructions on killing your zombified clone. Hypnotized boxers. How to get a free lunch using only creamer and a fork. Stephen King doing battle with a werewolf editor. Bridge-jumping, everyone’s doing it!

See it all and more in this diverse collection of 25 stories, which showcases A.A. Garrison’s quirky brand of humor. The conspiracy is real, and you’re the target!

Buy the eBook, get samples, and read reviews at these vendors:

Lulu  Createspace
Posted by A.A. Garrison at 7:17 AM No comments:

12/9/13: The High Illogical: A Collection of Strange Tales

Now available from A.A. Garrison: The High Illogical: A Collection of Strange Tales 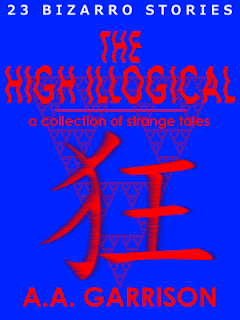 
“When I write bizarro fiction, my goal begins and ends with a concept I’ve come to know as ‘the High Illogical’ ...”

This isn’t your everyday weirdness. When it comes to the High Illogical, think David Lynch conducting Beethoven in space. Think sculpting mathematics into a prettier color. How might the Louisiana Purchase taste, Batman?

First appearing in various bizarre-friendly publications, these stories pursue the High Illogical in a whirlwind chase. Call them absurd. Call them grotesque. Call them outright incorrect. Just don’t call them normal, unless you want to see a book frown.

(Note:
The preceding introduction is at least 50% untrue, perhaps more. This book’s true title is 'Dick’s TV,' and you’d do well to heed this, traveler. See prologue for details ...)

Buy the eBook, read samples, and get reviews at the following vendors:

Buy the book in print, via Print-on-Demand, here:

Lulu  Createspace
Posted by A.A. Garrison at 12:10 PM No comments:

Yet another instance of word-synchronicity, this one. It started the morning of November 29th, 2013.

I was going through some old short stories I'd had published over the last few years, is what triggered the incident. About a year ago, I pledged to assemble my published stories into collections to be self-published as eBooks, for the hell of it. Now, all these months later, I'm finally getting around to it, which meant combing my archived stories and assembling them into the said collections.

While I was doing this, one story in particular caught my eye: "Borborygmus."

It was a goofy, lighthearted horror story I'd written on a lark and then had published in a low-key anthology some time ago. But on the morning of the 29th, as I encountered it for the first time since I'd dragged the Word file into my computer's "published" directory, I had the thought: Borborgymus -- what a clunky, obnoxious word. The word, which I'll let the reader look-up at their leisure, thus impressed itself upon my mind, enough for me to absently take notice.

Also worth mentioning: it was the first I'd seen the word "borborygmus" since the anthology my story appeared in was published, years ago. And why should I see it? It's a rigid, non-descriptive medical term probably not used outside of a Bible-thick tome of procedural jargon.

I soon finished up perusing my short stories, and then, less than a half-hour after encountering "Borborgymus," I checked my email. And there, in my inbox, I was met by this subject line: "borborygmus: Dictionary.com Word of the Day‏." The email was sent on the 28th, but I hadn't checked my inbox until the morning of the 29th -- so there's no way I could have known it would be there ahead of time.

A classic, synchronistic recurrence: Within the span of minutes, I'd by chance encountered the same rare, obscure word in two different, unconnected places -- after I'd Noticed it specifically in my folder of short stories, and after I'd been putting off going through those stories for a full year. And, let's not forget, after I'd experienced dozens upon dozens of nearly identical incidents, all fitting the same pattern of distinct, precognitive-like recognition and then recurrence.

Being jaded by past experience, I just chuckled and then opened my synchronicity log to make a new entry. "Borborgymus" will be appearing in an upcoming short-story collection, I've decided.
Posted by A.A. Garrison at 2:36 PM No comments: