Well, it's not really my book. Or remotely mine. But I do have a story in it, and it's the first one, if that counts for anything.

Rotting Tales, a zombie anthology from Pill Hill Press, a great bunch of folks who deserve your folding-green. 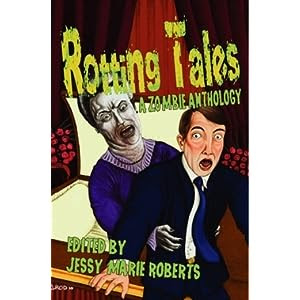 Buy on Amazon.com
Posted by A.A. Garrison at 7:24 PM No comments:

It started two years ago, when I wrote my first novel.

It was supposed to be so grand. After conceiving, plotting, and outlining an epic series of eight novels that would make Atlas Shrugged look like a religious tract, I finally buckled down and wrote the first one, a sci-fi extravaganza called Other. It took four months of eight-hour days, along with approximately a gallon of my blood, sweat, and tears, and then I had it in first draft. Then I got distracted with the second novel in the series ... wrote 40,000 words of another, unrelated novel ... and got addicted to writing short fiction, which left Other sleeping on my hard drive for nearly two years. Until last month, when I decided to dust it off and develop it.

I looked over Other, and liked what I saw. It would need to be rewritten, obviously, which would require a solid month in itself, but I figured it would be worth the investment. If nothing else, the novel contained some technological demonstrations that I thought intriguing. And unique, I thought them very, very unique.

Then, two days ago, I went and saw Avatar, and now my beloved first novel is officially trunked.

If you're one of the ten-odd people who have read my blog, you would know that I don't watch many movies. Okay, none at all, except for one every so often, when I feel "led" to. These inspired movie outings have always resulted in something positive in one way or another -- and Avatar was no different, I suppose, considering it saved me a lot of embarrassment. You see, the showpiece of Other was a technology that allowed one to, among other things, control a surrogate body via a mind-machine interface, kind of like virtual reality made flesh. Kind of like Avatar.

Here's the knee-slapper, though: In my book, set in the year of 2195, society has become interspersed with these surrogate bodies, used primarily by the infirm and intensely agoraphobic. When I was writing the book, it took me a while to decide on a name for these robots, but eventually a really good one came to me: avatars.

Again: I wrote this two years ago, and thought it up years before that.

I considered going forward with the book anyway, in spite of it appearing as a blatant ripoff -- with a note, perhaps, at the start, explaining what I just outlined here. But ... nah.
Posted by A.A. Garrison at 6:47 PM No comments: