Negative ions. They're good for you, if you didn't know.

These days, you hear a lot about this stuff. There are ionizer gizmos that plug into wall outlets and renew the air, and those big, pink, warmly glowing salt lamps that are seen ubiquitously in health food stores and head shops. Also, there are the "detox foot baths," which, supposedly, work their magic by ionizing the body directly, via the feet.

Say what you will about them (and, yes, there's plenty of controversy over the practice, like any health gadget that's attracted miraculous claims), but I personally have found, through relatively objective personal experimentation, that these foot baths do in fact exert a real and positive effect on the body (or, at least, on mine). And, likewise, I've determined that this effect does seem to stem, in some way or another, from the induction of negative ions, for I've discovered markedly similar effects from other supposed means of ionizing oneself (salt caves, ocean air, and earthing/grounding, for instance). Consequently, I enjoy a foot bath from time to time, and am always rewarded with a general pick-me-up of some fashion.

So, that's how I came to be sitting down to a foot bath today.

Upon putting my feet in the soak, I was struck with the thought: Negative ions. It just hit me, in every sense of the term, as if remembering the very concept after a long time. And, I guess, that was sort of true: after a year or so of my discovering the foot baths, and my subsequent research of negative ions, I hadn't really given them much thought. Today, however, I did. For some reason.

Negative ions. The words were etched across my mind as I began my latest podiatric ingestion of the things.

Naturally, I cracked a book just after the bath began, to pass the half-hour, as is my custom for these sessions. As it were, today's selection was The Snow Leopard, by Peter Matthieson, a first-person account of one man's physical and spiritual journey through the Himalaya mountains in 1973. It's one of those famous classics that, somehow, I'd just missed up until now (so many books, so little time, you know). In fact, I only learned of the book's fame after buying it; at the time I'd stumbled upon it, The Snow Leopard was a totally random purchase, a library discharge in fact, which just announced itself to me and demanded to be bought. So, blindly, I'd paid the quarter for it and been on my way, after which it joined my towering stack of unread books (where it would remain until, just two days ago, over a month afterward, I'd felt Compelled to choose it for my next read ...).

Two pages into my reading, I gave pause: "... there are recent speculations that negative ions, which seem to be positive in their effect on animals and plants ..."

I did a double-take. First, because my unexpected pondering of Negative ions still lay across my mind, having occurred literally a minute or so beforehand. Second, because I'd had to turn the page to expose this passage -- that is, I couldn't possibly have subconsciously read it in my peripheral vision, thus ruling out psychological suggestion of some kind. It brought about that synchronistic sense of "echo" which characterizes these experiences, literally making me stop and blink like a cartoon character.

But then, third, there was the book itself: I wasn't reading a health journal, or even one of those duplicitous supplement advertisements disguised as such -- nothing where one might expect to encounter talk of negative ions. Instead, my book was about a pilgrim struggling through rugged country on a wildlife expedition (written nearly forty years ago, nonetheless, before the whole negative-ion craze was even a twinkle in the internet marketer's eye).

It persisted through the rest of my foot bath, like the icing on a very surreal cake.
Posted by A.A. Garrison at 4:16 AM No comments: 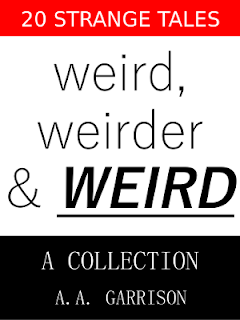 
"Weird is a sad clown in church. Weirder, that the congregation is all clowns. Weird: you’re a sad clown, too, and you think you like it.
That says it all. In Weird, Weirder & Weird, descend into the depths of A.A. Garrison’s particular brand of strange. Begin with the traditional, sci-fi weird (“Suffer,” “RIP, Krokinski”), progress to the hauntingly peculiar (“Faith,” “Chesterfield Drive”), and then end with some full-throttle, no-apologies bizarro (“The Enema Flower: A Love Story,” “GG Allin Must Die”). Altogether, these twenty stories deliver a full spectrum of weirdness–and then some.
Come on, don’t be shy. Everyone likes a little weird. Or are you afraid you’ll like life as a sad, church-going clown?"

eBook available from the following vendors:

Lulu | Createspace (cheaper)
Posted by A.A. Garrison at 10:16 AM No comments: