Read the saga of one man's return from crippling illness -- for free! 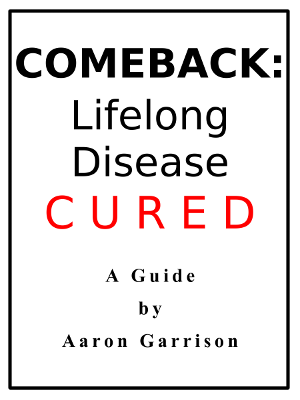 For Aaron Garrison, illness had been a fact of life, ever-present from childhood. Then, after a steady decline spanning into his thirties, his health at last hit rock bottom, rendering him largely bedridden. Life became a fight for survival, and it was one he was losing. So he had a choice: find a cure, or continue a downward spiral into invalidity (or worse).

Thankfully, a cure was found, in the form of the comprehensive treatment outlined in this book.

Inside, read of how Garrison devised and executed the year-long health regime that would save his life and cease a lifelong descent into disease. Using a gentle and accessible approach, his treatment is broken down into individual practices, complete with explanations, tips and tricks, and safety precautions.

In the end, it's one man's comeback story, told in the language of healing and the small dramas of self-empowerment, made available for others' benefit.


Available as an eBook from the following vendors (free at Kobo, Lulu, and Smashwords; $0.99 elsewhere):

Available in print at:

Lulu  Createspace
Posted by A.A. Garrison at 6:43 AM No comments:

A Series of Shocks

It's a study, I've found. When it comes to such mental silencing, each branch of the mind is different. For me, the illogical subconscious can be shut up by a single, quick event or experience of adequate consequence, such as seeing gravity repel one's foot from the ground instead of pulling it down. The logical, conscious mind, on the other hand, is quieted by the opposite: it takes a succession of events to penetrate the conscious mind and its calcified hedge of logic, being resistant to the individual hard-hitters that can flummox the subconscious so.

One afternoon, I was out driving. That day, I'd been haunted by numbers again -- 137 and its variants, namely. They were assailing me from everywhere, as I've documented in past posts; but, chiefly, they were arriving via the license plates of other cars.

I stopped at a light, and there it was again, on the car in front of me: a 137 on its license plate.

But that could easily be chance, my logical mind announced, in answer. If it's not just chance, then shouldn't the car next to that one have one of the numbers?

I looked to the next car over, and its license plate ended in 3733.

Still just coincidence, insisted Logic. Were there three, you might be on to something.

Immediately after this pronouncement, a car edged up closer to the light, thus exposing its license plate directly into my view: 3701.

My logical mind made no response, its figurative jaw left open.

Shocked, I thought then. My logical mind has been quieted by a good old-fashion synchroshock.

But, no, it didn't stop there.

Precisely as this thought crossed my mind, the lyric "a series of shocks" sounded over the radio, in classical thought-synchro fashion, that so distinctly patternistic of past incidents.

A series of shocks, yes. That's what's necessary to quiet the logical mind, after all.

I laughed out loud.
Posted by A.A. Garrison at 7:20 AM No comments:

Definition #1: the "action synchronicity" ("action-synchro" for short) - defined as a personal, subjective action or event that is somehow reflected in external, objective reality, and in such an immediate or otherwise unlikely fashion that could be categorized as "synchronicistic" in the Jungian sense of the term, the two often coinciding in circumstances that discount traditional, causal explanation or a reasonable level of chance occurrence.

Today, while attending a speaking function, I experienced a textbook action-synchro. Consider this an object lesson of sorts.

It started with a note.

I kept thinking, was the thing. I was listening to the speaker, to be sure -- paying rather close attention, in fact, just not undivided attention, that which one's schoolteachers might've once demanded. For were I stop thinking, I might forget the very important things I was thinking about. Thus I was forced to keep thinking, and my attention remained divided.

And that's why I needed to write a note, to immerse myself fully in the function which I was so respectfully attending.

Having made the mistake of not bringing along my trusty notepad, I cast about for some paper and a writing utensil, any utensil -- and there, a pen in the behind-the-seat pocket of the new row up, and there, a flier for an upcoming music show, its back attractively blank. Perfecto.

I blottered the paper over my knee --
Uncapped the pen --
Dimpled the paper and eeked out half a letter --
Precisely as the speaker said "make those notes."

I smiled broadly, laughing inside as I consigned my pestersome thoughts to paper. After those, however, I stole another couple seconds to write yet another, new note: "'make those notes' synchro," to remind me to log this latest in a string of action synchronicities.

Definition #2: the "thought synchronicity"/"thought-synchro" - just like the action synchro, except with external, objective reality reflected in one's thoughts, as to be even more jarring and surreal, sometimes to the point of catapulting the experiencer into something like a living dream.

And now, for your consideration, a case-in-point for the thought synchronicity -- which, as it were, occurred immediately after the "make-your-notes" incident quoted above.

So there I am, quietly buzzing after hearing "make those notes" at the exact moment I put pen to paper for the express purpose of note-making. Then, in that wowed afterglow, I was struck with a thought: of how electrically surreal a synchronistic experience feels in the moment, that same "numinosity" that Jung and countless others have described -- or, perhaps, a transcendence.

Yes, a transcendent moment. That's how such a good, striking synchronicity felt, I thought just after writing my note.

Right as I thought this, within the space of milliseconds, the speaker then launched into a new subject: "The transcendent moment," she said, introducing us to the topic. As it were, it was what she'd been about to advise us to make notes about.

Upon hearing this, I only wrote a new note: "'transcendental moment,'" with an arrow snaking up to that for "make those notes." This one, however, I was able to do quickly, too fast for my attention to divide; I hadn't yet put away my notepaper from before.

From there, I was at last able to devote my undivided attention to the rest of the speaker's message, my smile widening as much as politeness allowed.
Posted by A.A. Garrison at 7:58 PM No comments:

I was on vacation at the beach, reading, in a sun room looking out on the surf. It was a good day; I was happy; good things were happening. Except, it was overcast and sullen outside; and weren't Good Day's at the Beach supposed to be sun-shot and picturesque?

Yearning for such weather, which would've been the cherry to my sundae, I went to the sun-room door and opened it up: still cloudy and dreary. Oh well. At least I still had my book.

Once I resumed reading, however, I gave pause, struck by the next line: "Soft, cloud-filtered light streamed through a pair of glass windows in the seaward wall."

The words forced my head up, to the sun room's seaward wall, out the door's pair of glass windows, at the very soft, very cloud-filtered light streaming through.

After momentarily pondering how I seemed to have acted out, to the detail, the very scene depicted in the book -- just seconds before reading that line -- I laughed devilishly. 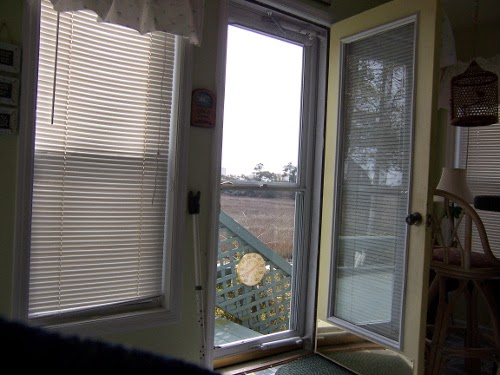 (My view of the sun room door) 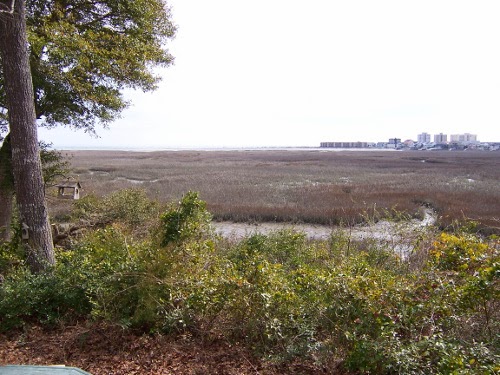 (The seaward scene visible through said door, the Atlantic seen beyond a marsh)
Posted by A.A. Garrison at 6:05 PM No comments:

The Fall of Man

Find my bizarro-satire story, "The Fall of Man," in Issue #21 of Hobo Pancakes, for free online!


http://www.hobopancakes.com/
Posted by A.A. Garrison at 6:00 AM No comments: