I was on the road. It was lunchtime. I wanted some good, fresh, non-convenience-store coffee to go with my meal. So I stopped off and, with my trusty smartphone, searched for "nearby coffee shops."

Out where I was, in the coastal North Carolina countryside, only one result came up: Worms & Coffee.

My first thought was, Interesting name. My second was, Too far away, for the place was, indeed, several miles too distant to be worth the trip. So, back on the highway I went (after which I would soon find a suitable coffee shop, where I lunched and all was well). Before turning around, though, I did have a parting thought: Guess I'll never see the Worms & Coffee coffee shop, then. It was oddly disappointing, like missing out on some rare but unimportant event.

Yes, this being a synchronicity story, you probably know where this is going: somehow, in some profoundly unlikely way, I miraculously find myself at Worms & Coffee. You aren't wrong; but, the real wow of this incident is appreciated only in the details of my arrival.

First, I took a wrong road, when beginning the trip home. Though, this is a bit of an understatement: I took not just "the long way," or "the scenic route," or the road that would leave me on the wrong side of the tracks. Rather, this was the wrong road, in the sense of heading for Maine when you're looking for Florida. Coming out of Wilmington, NC, after having visited for my first time, I'd just continued south on the road I'd ended up on after my stay. I was, after all, just heading back "south," to Myrtle Beach nearby. South is south, I thought. The ocean was to my left and my car's hood was pointed down, so I was bound to hit Myrtle Beach eventually, right?

Unfortunately, I was ignorant of southeastern North Carolina geography. Namely, of the Cape Fear river and its peninsula.

Going blindly "south" for miles and miles, I'd kept expecting an exit to the highway, and wondering why there weren't any. Well, once the southerly road dead-ended at a picturesque beach (and I became enlightened in regards to the Cape Fear peninsula, again thanks to my handy smartphone), my questions were answered. There was one consolation, however: my misadventure had taken me right to a ferry port, and the next departure was in less than a half and hour. Oh well, I thought. Maybe a ferry ride will be fun.

Indeed, I did enjoy the ferry, for all the time my detour had cost me. And, at least I hadn't had anywhere to be (oh wait, I had; thankfully, the doctor was understanding when I called and cancelled my appointment). My butt hadn't even gotten too sore. However, my detour was just beginning.

Back on shore, across the Cape Fear river, I started home to Myrtle Beach ... only to get lost again. How I got lost, I'm still not quite sure; and, besides, it doesn't have much bearing on the synchronistic side of this whole mess (nor does the excruciating traffic jam that I became enmeshed in as a result)). But, in any case, this second navigation mistake introduced a pertinent twist in my story: it made my ill-fated journey back to Myrtle Beach that much more convoluted and roundabout, sending me even further astray into coastal southeastern NC. The same goes for the additional tangle of turns and byroads that was required to correct this latest mistake; by then, I was beyond lost, having shed all sense of direction or location, like a bloodhound with a busted nose. By the time I at last finished my wrong-turning and then got back on course, it was hours after I should've already been home.

At least I kept my cool and had some fun, I thought as I drove on (with a butt that had, by then, grown very sore), as consolation for my "wasted" day. However, my adventure wasn't quite over yet.

Right before reaching the highway I'd been desperately seeking out all afternoon, I passed a lonely little brick building, sitting on a desolate corner in the middle of nowhere. Worms & Coffee read a neon sign in the window, looking out of place in the emptiness. I'd gotten to see it, after all (really "after all," in this case).

So it was only natural that the Ruckus in question caught my eye.

I saw it while driving through a small neighborhood that played host to a sprawling apartment complex. The scooter was parked in the complex's lot, and immediately upon seeing it, I had the distinct thought that it was for sale. I had no reason to think so; the scooter had no festive Halloween-orange "for sale" sign, nor any indicator of being for purchase. Yet, illogically, I felt -- knew -- that that Ruckus was on the market, such that, had I not been pressed for time, I would've stopped off and inquired about the asking price.

I drove on, telling myself that my yen for a Honda Ruckus was putting thoughts in my head. Three days later, however, that conclusion would change.

Not having found a scooter in this time, I checked my town's Craigslist page -- and there, posted barely a half-hour earlier, was a listing for a Honda Ruckus. First came excitement, upon seeing a local Ruckus for sale (and at a reasonable price); but that soon gave way to awe, as I browsed the pictures and at once recognized the scoot as that which I'd so memorably spied while out driving the other day.

Just to be sure, I returned to the apartment complex I'd passed. The scooter was still parked there, and after I compared it to the Craigslist pictures, it was indeed one in the same, right down to the parking lot and landmarks in the background.

Once more, I laughed.

(It bears mentioning that I shouldn't have even been driving in that neighborhood in the first place, that one day. I'd had no business there until a random man, seeing me looking at cars just down the road, directed me to his used-car lot, located just nearby, in that neighborhood where the Ruckus was parked. Interestingly, I'd felt Compelled to heed the man's tip ...)
Posted by A.A. Garrison at 6:09 PM No comments:

The number 37. I was seeing it everywhere, though this was nothing new. The book page, however, was new.

It happened at the beach.

I'd gone out to sun, which I did, and it was good. Then, as I started back to my truck, something odd happened: I found myself going a different way than I'd arrived. Instead of walking over the stairs and deck to the parking lot, I went alongside them, down in the sand. It struck me as illogical, since the sand was loose and difficult to walk through; but then, I'd been intuitively Compelled to go that way, and I'd long ago learned to obey my Compellings. So I went with it.

There, I found the page.

There was a lot of litter in my path, along the dune I was walking beside; yet I felt Compelled to pick up just one in particular, a small, unassuming piece of paper. I grabbed it up, and felt another Compelling, now to read the paper's black type.

As it turned out, the litter was a single, stray page from a paperback book. In the header, the page number read "37."

Could I have seen that page number on the paper, subconsciously, and been attracted to it? No; I'd been Compelled at distance from it, too far away to read the small, paperback type (plus, I didn't even have my glasses on, being out on the beach). And, what about my being Compelled to walk down there in the first place, before I even had a chance to see the rogue book page at all?

This, after seeing that number no less than two dozen times in the preceding hours, and always in ways such as this, conspicuous and in-my-face and hugely unlikely (and that was just that one day ...).

I laughed. Indeed, I laughed. 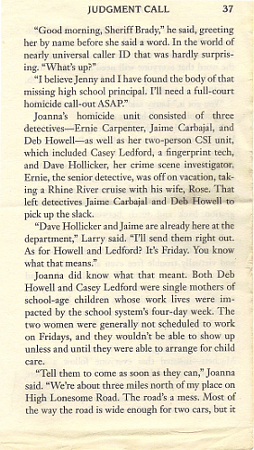