For anyone unfamiliar with this blog, I have experienced a regular stream of rather unlikely coincidences -- unlikely enough to be considered "synchronicities," and coherent and numerable enough to be written about. Recently, however, the phenomenon took a breather.

It was January 20th it happened, after approximately ten days of silence. Within this period, I had become accustomed to "normal," logical, non-synchronistic life -- not so much to forget the phenomenon entirely, but long enough for it to fade against the backdrop of new life experiences and demands. Certainly, this wasn't the first such drop-off of "activity," for in the years since my becoming aware of the phenomenon, I've experienced several of these weeks-long subsides. Yet, when the first new synchronicity arrived, my reaction was stronger than it would've been otherwise, the way absence makes the heart grow fonder.

The synchronicities came in rapid succession, three of them, almost identical.

The first occurred while I was driving. I pulled up to an intersection, saw that it was a red light, and thought, distinctly, of how I wanted the green light. Immediately after my thought, the song I was listening to in my truck's CD player said "green light," with less than a second between the two. The sheer coincidence factor was enough that the recurrence would've been noticed in any case, with such perfectly "synchronistic" timing that I couldn't have coordinated it had I tried. But, considering that the coinciding occurrences fit seamlessly the pattern that's been established in my past experiences (recurring thoughts, events, or themes in near instant succession), I took special notice.

After the wow had worn off, I was quick to make a note. Another one for the file.

Then, just minutes later, it happened again: just as I thought "fan," I overheard someone say "fan." Again, this happened with a crisply distinct spontaneity which, despite being nearly impossible to plan, again fit precisely that snap-bang format I've come to know for this particular type of synchronicity. An interesting note is that the thought which preceded "fan" pertained to my seeing something which I thought was an electric fan but, on closer examination, proved to be the mechanical top of a paper shredder -- that is to say, something which bears absolutely no semblance to a fan. Yet, I thought this, just before a nearby person, unconnected to me, said "fan" aloud (and yes, my thought was before the person said fan -- just before, less than a second, but definitely before, thus ruling out some sort of subconscious suggestion for me to see the paper shredder as a fan).

My first note was joined by an addendum reading "fan."

Then, approximately a half-hour later, the third such synchronicity arose: this time my reading "thank you" precisely as someone behind me said "thank you." What I read was the swipe terminal at a grocery checkout, which printed "Approved - Thank You" just after I swiped my credit card -- which, coincidentally, occurred precisely as the cashier behind me said "thank you." This one, unlike the other two, is not as distinct and complicated -- and, thus, not as unlikely from a statistical perspective. However, it is lent some notability by the fact that it fit so perfectly that pattern previously established -- not just over my years of past experiences, numbering in the hundreds, but of just over the last hour. Feel one rain drop, and you might shrug it off; feel a dozen, and you'll prepare for a rain shower.

So there I was, right back in the whirlwind of dreamlike unreality inspired by such incidents, as if I'd never left.
Posted by A.A. Garrison at 12:17 PM No comments: 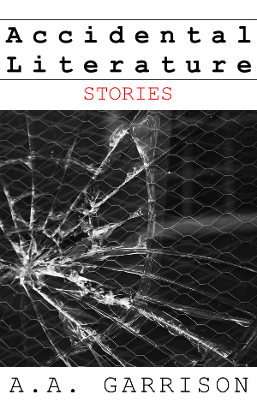 
In this collection: 19 short stories of a literary bent.

Variety defines these stories. From dark to light, humorous to dead serious, experimental to traditional, flash-length to novelette, these 19 selections from author A.A. Garrison fulfill a mixed spectrum of tastes and styles. No two are alike, and surprises abound.

Be taken by these words. Be seduced. Be offended. Be wowed.


Buy the eBook, read sample stories, and get reviews at these vendors:

Lulu  Createspace
Posted by A.A. Garrison at 8:56 AM No comments:

A new short story collection from A.A. Garrison: What Is and What Could Be: Tales of Imagination 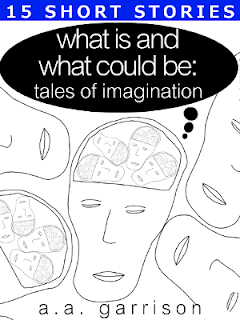 Sometimes the best fiction defies all labels. That’s why these stories are called, simply, “tales of the imagination.”

In this collection of 15 diverse selections from author A.A. Garrison, the reader is introduced to a broad expanse of literary territory, ranging from sci-fi to crime to post-apocalyptic ruminations, including some outright weirdness and a no-apologies zombie romp.

Included in this slideshow of imagination:

And more! Comprising a full, novel-length read, this collection is guaranteed to satisfy most literary appetites. After all, isn’t all fiction about imagining what is and what could be?

Read sample chapters, get reviews, and buy the eBook from these vendors:

Lulu  Createspace
Posted by A.A. Garrison at 9:02 AM No comments:

A collection of speculative novellas from A.A. Garrison: The Long Short Story: Novellas 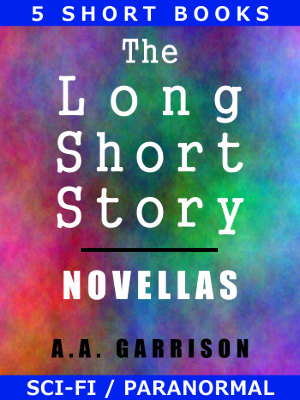 Some folks like short stories, others enjoy the deeper waters of a novel. But what about those times when a short story is too short and a proper novel too long?

Enter the novella, that literary stopgap.

Collected here are five such long-shorts, of a speculative bent:

The Long Short Story – guaranteed to occupy that lengthy commute or trip to the park, when other fiction just wouldn’t sit right.

Buy the eBook, get reviews, and read a sample story at these vendors:

Lulu  Createspace
Posted by A.A. Garrison at 9:11 AM No comments: