The Radio Reads My Mind

When it comes to radio synchronicity, I'm pretty bold. Most folks wouldn't admit that their precise thoughts and feelings are repeatedly and frequently echoed by the various radios and other vocal devices encountered in daily life. Even fewer would confess this publicly, online.

Then again, when something happens enough, and with enough consistency and reality, one is prone to boldness.

So, why not a little recounting of some of my funner radio-type incidents as of late?

12/7: "A whole bunch of radio/thought/reading synchros this afternoon, such as lot' coming over the radio perfectly synchronous with my thinking "which lot is that guy on?" at the end of a long and random chain of thought, and then 'sentimental feeling' on the radio coming perfectly synchronous with my thinking, at the end of yet another objectively begun chain of thought (spurred by seeing a nearby woman), of how I was feeling mawkish and "sentimental," that word exactly."

12/7 (continued): "Also, a cool radio synchro, much like that one from a few years ago with the in-house pharmacy radios. I heard a 'Feed the World' song randomly on the radio after leaving the gym, and it stood out to me, in that Noticing fashion. It played over the mile from the gym to the market, then finished right before I went inside. Then, as I entered the market, the exact same song was playing. Granted that it was a Christmas song and it's Christmastime, but still pretty unlikely. And now that I think of it, didn't I have some other radio synchro involving this song last year at this time?"

12/10: "While I was getting a massage from Val, she had random music playing in the background, and just when she randomly said, totally offhand and tangentially, 'there were birds chirping,' a bird chirped in the background music. It was notable enough in itself, but doubly so considering that there'd been no chirping before she said that. Damn surreal (and she thought so too, once I'd pointed it out)."

12/10 (continued): "The coolest of the day, however, was on the way home, when a star came into view through my windshield at the precise moment 'a star, a star' came over the radio -- again. It was not only a highly precise, perfectly synchronistic, and hugely unlikely due to the logistics involved (once again, it was the one point on the road where this star, again the only in the sky, was visible, both due to the height of the road and its effect on my windshield/field of view, and also due to there being a "valley" of trees lining the road and obscuring the sky, such that that precise point at which the road both curved and raised and the trees parted at just the right way was that (single) star visible). Utterly surreal and notable in itself, but then, *it was exactly what had happened just Monday, on the way home from myofascial release.* Damn cool in so many ways."

12/13: "A really cool standout, three-way thought/radio/event synchro. I passed the Living Waters church on the way out of SC, and I took notice because, just yesterday morning, I'd found a card for this church randomly in the trash bin at the gas station, and it had Lept Out at me/Nagged me in Compelling/Noticing fashion until I'd taken it out and read 'Living Waters' church. Then, precisely as I passed the church and read its sign and had the thought 'That's the church I'd just picked up the card for yesterday,' when the radio sang out 'water' on some random song."

12/13 (continued): "Standout, classical radio synchro: right as I'd passed a sign reading 'young world,' the radio sang out 'young,' so perfectly synchronous I had to take note, despite the one-word shallowness of it. Also, similarly: 'lift you up,' precisely as the gate lifted for the drawbridge, right in front of me. Damn surreal, that one."

12/14: "Another classical radio/thought standout: after I'd taken a deep breath and felt it hit my chest in that good, rare way, the radio sang out 'feel it in my chest,' perfectly synchronistic. And, again, gains notability given that 1) nothing in the song had said that beforehand (it wasn't a refraining chorus or something, that is), and 2) I'd had that thought for a 100% objective reason, because I'd taken a good, proper deep breath and had it enter my chest as it's supposed to (and for the first time today, as it were, coinciding perfectly with that random lyric on a song I'd never heard before ...)."

12/15: "One cool one this morning, a radio-type incident with a twist: when I'd come out of the tag office and started backing out, a passing woman started directing me out, and I'd lowered my window and we'd talked briefly, and I'd told her (illogically and because of confusion, it bears mentioning) that the enormous, full-size truck I was driving was a rental that they'd given me in place of the small car I'd reserved. Simultaneously, the song 'Mother Trucker' by James Taylor came on the CD player, with the lyrics "I'm a truck-driving man" or something to that effect coming on almost perfectly synchronistically with my telling the woman, objectively in regards to our conversation, about how I was, as it were, a 'truck-driving man.' Really notable, and cool, especially with its illogical/confused context."

12/16: "A highly notable and precise thought/radio/sign standout: hearing 'risk your health for me' on the radio, perfectly synchronous with my thinking almost exactly that, in regards to the lover/merkaba theme. Also, a two-part one on the way home tonight from Charleston, even more notable: right as I came upon a freshly crashed car/accident and almost ran into a spray of broken glass/car debris and had to slam on my brakes and stop short, thereby stopping several cars behind me, 'can't stop the traffic' sounded on the radio (though, oddly, I *did* stop the traffic; perhaps only the "stop the traffic" was the relevent reflection/synchronous manifest?). And then, minutes afterward right down the road was a second crash, and precisely as I came upon it and saw that it was indeed a second crash (and had time to think 'crash,' as it were), 'crash and burn' sounded on the radio. Surreal."

12/17: "Right as I stopped at the road at the park's driveway, I thought, first, of how I was now in a twenty-year-old used van after just driving the brand new rental truck, and how I was now back to being a 'commoner'/everyday Joe Schmoe-type. Immediately as I thought that, an oncoming car appeared, this too a "commoner" vehicle, probably as old and with some paint imperfections, etc, and so I felt I felt a sort of camaraderie with the driver and their car -- and then, a split second after these two things happened, the song 'Working Man' started on the radio. Note that, though not quite perfectly synchronistic (maybe a half-second gap in there), the timing actually added notability, since the song starting only after the thought/car ruled out any sort of suggestion/trigger, etc."

12/18 (continued): "While paying in Starbucks, a classic radio/thought synchro: 'five-and-ten' coming over the radio precisely as I decided upon a ten-dollar bill and pulled it out of my wallet, my thought of 'I'll use the ten' and the radio's 'ten' coinciding perfectly synchronistically, etc."


Etc, etc, etc. Yadda, yadda, yadda. You get the point: the radio echoes my reality in amusing and intelligent ways.

Or so it seems, at least. No shortage of people would easily write off each and every one of those examples, citing chance or psychology or the influence of certain spiritual entities. To them I say, "Perhaps." However, I should mention that that list of incidents is just from the last week or so (and only partial at that, quoting only the more-coherent or less-complicated of incidents, as well as the great many incidents too subtle or subjective to be logged ...). There's plenty more where that came from (like, hundreds).

But really, guys, do call off the butterfly-net men, eh? After all, could someone truly delusional maintain such an elaborate and wonderful blog?
Posted by A.A. Garrison at 7:07 PM No comments:

So, here's something of a trip: a book that contains this blog ... posted on this blog. 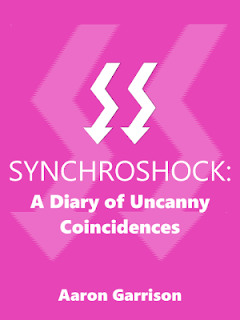 Yes, some have explanations. Buy a certain car and suddenly you're seeing them everywhere -- selective perception. Get hungry for a certain food soon after seeing its advertisement -- subconscious suggestion. However, then there are those other kind of coincidences, the ones that are just a tad too ... coincidental. When it comes to these, one can't help but wonder: Is there something more than meets the eye, something going on behind the scenes of reality? There, we enter the realm of the "synchronicity."

I, Aaron Garrison, have experienced many such suspiciously coincidental coincidences. So many, in fact, that I began logging them -- and, eventually, blogging them. This book is, simply, a compilation of that data, reading as a personal diary of dozens upon dozens of incidents that all beg the question, "What are the odds?!"

In ‘Synchroshock,’ discover where coincidence ends and synchronicity begins.


Essentially, it's a free eBook version of this blog, offered as a convenience, for free (at vendors which don't require a .99 cent minimum price, at least).

Get the Print-on-Demand version here (book is big, and thus costly to print):

Lulu | Createspace
Posted by A.A. Garrison at 6:33 PM No comments: