I see numbers. The same numbers. Over and over again. A bit unbelievable, even sci-fi? Yes. Worse, cliche? Perhaps. But it happens. Has happened many times. Will probably happen again (unless someone uncrosses the circuit in the Universe's server room).

I see the numbers ever day, more or less. But some days, I see more of them. Today was one such day.

The number 137 was the star, this time, along with its derivatives (173/1137/7031/373, etc). The sightings started when I did: in the morning, with 137 and co flying at me from all directions. On the clock, roadsigns, timestamps on computer files, the license plates of cars that cut me off or otherwise drew my attention -- and on and on. If there was an avenue for the numbers to somehow find their way into my field of awareness (and do so in some unlikely way, as to impress me to the point of taking notice), it arrived within the course of my morning of work and errands.

And then I stopped for gas.

I hadn't planned on getting gas. I didn't even need gas, really (I feel comfortable with a half a tank). But I had a few minutes to kill before a doctor's appointment, and the gas station was literally right across the road. I treasure time, and don't waste it (nor did I want to waste my time in the waiting room at a doctor's office). So I got gas, maybe for the first time before the needle was making love to the big "E." And, the total amount I ended up getting? 11.73 gallons, exactly. And did I intentionally squeeze off just this amount, perhaps in some subconscious attempt to manufacture a "meaningful coincidence" and, hence, feel special? Nope. I'd just fed my truck the nozzle, set it on auto, then returned to my cab and let her fill (I had something to do in there; again, I don't waste time). And, let's not even get anal about the chances of such a hit; considering the circumstances of this number arising in this fashion, after I'd been literally besieged by it all morning (and for years previously), at least a couple dozen times -- just ... no. We're talking astronomical figures, here.

But, it was still morning then. The day was still young.

Next to join the 137 bandwagon: the CD player in my truck. Over the couple hours I spent at the doctor's, the numbers had stopped pestering me (even numbers need rest, you know). But this only made the forthcoming incident that much more noticeable. I was parked in my truck, eating lunch, when I decided to put my window down. So I keyed the ignition (because I'm one of the power-window elite), cracked the window, and then turned the key back as fast -- but not before the CD player blinked to life, just long enough to display the active track's time: 3:36, clicking to 3:37 precisely as I killed the power. Afterward, I sat momentarily with my hand on the turned key, in a quiet shock -- a synchroshock, that is (sorry, couldn't resist).

And were the numbers ready to call it a day? No, they were not. Not at all.

I was next visited at the market -- twice. Or maybe it was just one single, super-sized synchronicity. Anyway, this one began with my returning a vitamin supplement. I went to a register. I told the cashier what I wanted. He tapped some buttons on the fancy computerized checkout (am I the only one still fascinated with these wonderful contraptions? I'm caught back in the days of single-line readouts and dot-matrix-printed receipts). As a matter of course, the man then reached out for my return's requisite receipt, whereupon his watch was placed squarely into my line of vision -- thus forcing me to see that it read 3:17. Again, I was struck with stunned amusement. This time, however, I didn't have the chance to smile and laugh, for a split second later, the cashier read me the total I would be receiving back from the return: $31.73. I never did smile. Instead, I accepted my money and then walked the store in a contained shock, a kind of synchronicity overload.

"Surely that was enough for one day," you're saying now. "No number is that tenacious!!!" Normally, you might be right, for, indeed, numbers do need their rest. But this was no normal day.

The numbers still had one little surprise for me. Recall how I'd gotten gas that morning, when I'd purchased exactly 11.73 gallons by simply letting the tank fill to capacity (after seeing that number or its cousins no less than a couple dozen times on the way there ...). Well, that evening, while updating the spreadsheet of my finance books, I went to enter the new debit I'd incurred from buying gas: $26.95, which I'd paid on a credit card. The card's preexisting balance was $46.18, and so I added these together to get my new bottom line: $73.13.

I couldn't write this stuff, folks (and I'm a writer, for God's sake). 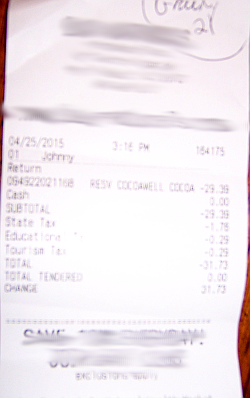 (Note the 3:16 timestamp. I guess Johnny the cashier's watch was a minute fast (or the fancy checkout computer was slow).)

(And, because one parenthetical anecdote isn't enough:  When I went into my records to fetch this receipt for the above photograph, I encountered two other receipts from the same market, both of which sported prominent 37's (a 3:37 timestamp on one, and a 7337 barcode number on another, these Just Happening to enter my line of sight). If it's not obvious, the numbers' sense of humor is rivaled only by their tenacity.)
Posted by A.A. Garrison at 6:44 PM