I've reported on my fun with numbers, certainly; and I've reported the newish, "combination-types" of these sort of incidents, too. Well, here's a little more of the latter.

This time, it involved bumper stickers.

First, I've been seeing numbers lately (which goes without saying, really, for the phenomenon hasn't stopped since it started, years ago). Second, the predominant repeats as of the last couple days have been 317, 144, and their variants (73, 14, 44, etcetera). Which brings us to the bumper stickers I got in the mail today.

The bumper stickers in question were for my websites, to be put on my newest vehicle, as to promote my little web-enterprise (the extent of my advertising, as it were). Upon opening up the mailer, however, I gave pause: there, staring up at me, were more my latest, most-popular numbers -- a whole cluster of them, at the bottom of the bumper stickers (their print numbers, I guess). I found this notable from the outset, due to the sheer amount of the repeats, and their total randomness, and their arrival precisely admidst a storm of these very numbers, lasting for days.

Though, what really made this incident blog-worthy was the underscore of irony, given that one of the stickers was for (drum-roll) SynchronicityBook.com. (Another patternistic component of these incidents, as it so happens, such as when I experience book synchronicities while reading books about synchronicities ...) 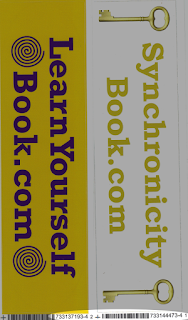 When I opened the scanned image in my photo editor, to crop it for this very blog post, I was met with yet another number-repeat, now in the scanned file's timestamp, as a Sundae-topping cherry of sorts.

Upon seeing the cluster of numbers on the bumper stickers, I'd smiled. Upon seeing the file's timestamp, I laughed (which, it felt, seemed to be the point of that little footnote, as if some force wasn't satisfied until getting that response ...).