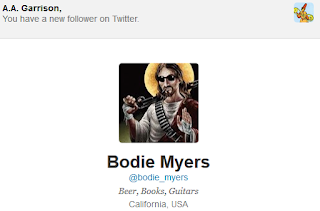 I don't know Mr. Bodie Myers (assuming this individual is male). But I'll send him/her my thanks, all the same. Besides synchroshocking me, your Twitter follower-ship gave me one hell of a laugh.
Posted by A.A. Garrison at 6:25 PM