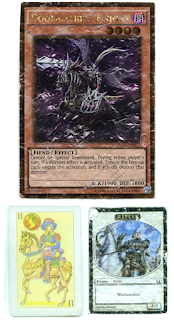 When I first picked up this latest card, I smiled. And then, seeing the unmistakable "Knight of Swords" archetype in its image, I laughed, quite loudly. To anyone else in the parking lot, I might've looked to have picked up a winning lottery ticket.
Posted by A.A. Garrison at 6:02 PM