My first novel, The End of Jack Cruz, a post-apocalyptic thriller of opiated proportions, is now available, from Montag Press.

Blurb, straight from the back of the book:

"The movies never prepared him for this, even the ones that ended badly. Jack “Colonel” Jones is suddenly alone in the world. After surviving a plague that decimates the U.S., and perhaps the entire human population, he is left in a junky’s nightmare where hard drugs are the only remedy for an ongoing virus and dead bodies are his only companions. Sick and desperate, he meets a savior who goes by the name Jack Cruz. Jack Cruz is a hulking behemoth with a giant pistol and stockpile of post-apocalyptic supplies, but he also has a mysterious past and an increasingly disconcerting obsession with the death and decay that surrounds them. As Colonel's suspicions rise, and he begins to feel complicit in the wrongdoings of his post-apocalyptic roommate, Colonel must grapple new the questions: Can you be moral when there are only two people left on earth? Can there be sanity? And who decides? Is Colonel just paranoid, or are his fears justified? As the stakes heat up and the intensity flares, Colonel must find out the truth and decide – when your only companion in the world might be a murderer, and there is no one left to kill, is surviving worth it?" 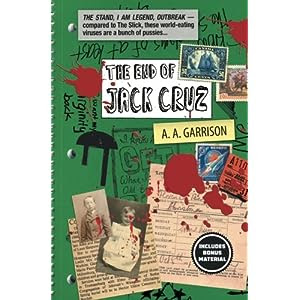