Read my quietly strange short story, "Comfort," plus a brief interview, at Theme of Absence, for free!


At one point in the film The Mask, Jim Carrey’s character suddenly turns to the camera and comments, “This guy’s incorrigible” -- speaking to the audience, as it were. That is, the character broke the first rule of cinema: that the film is not a film, that the audience is not there. Then, as quickly, the action resumes and Jim Carrey is back to pretending we aren't there, as if nothing had happened. It’s something like having the Devil convince the world he doesn’t exist.

Today, it occurred to me that this sort of thing happens in real life, in the form of synchronicities.

In the Land of Film, the viewer is compelled to suspend their disbelief and instead embrace the make-believe narrative presented before them. Yet, from time to time, the film betrays itself, with its players spontaneously abandoning the stage to address the audience. It’s a double-bind of sorts, in which the film reveals itself as a film, all as a mechanic of that very film. And then -- snap! -- it’s back to business as usual and the illusion regains solidity, the solipsistic narrative resumed.

Such is, I believe, the synchronicity: a rare moment in which the fabled Veil is pulled back, thus dispelling the illusionary narrative we call “reality.” Then, a hidden order is exposed, no different than the choreography of a massive film (though no less spectacular or beautiful for it). And in that moment, we are revealed to be not just an audience, but participants as well, ourselves creating whatever magnificent production is unfolding before us under the guise of life experience. It revisits the old enigma that “all is illusion.”

Of course, those magic moments will pass, returning us to the make-believe we've been convinced is “real”; but that changes little of what was revealed. From there, a decision befalls the enlightened “viewer”: Do we regain faith in our illusions, ignoring those secret workings in favor of “randomness” and “disorder”? Or do we choose to accept what we’ve seen, to inquire, to open ourselves to a bigger universe, one of infinite possibility ...?

The choice is ours, it seems, and I can’t say if there’s a right one. And why should there be? It’s our movie, after all.
Posted by A.A. Garrison at 6:27 PM No comments:

'Monk Punk' and 'Shadows of the Unknown' Omnibus - Now Available

Find my darkly bizarre short story, "Quietus," reprinted in the brand-new Monk Punk and Shadows of the Unknown omnibus, now available in one sprawling, 500-page book. 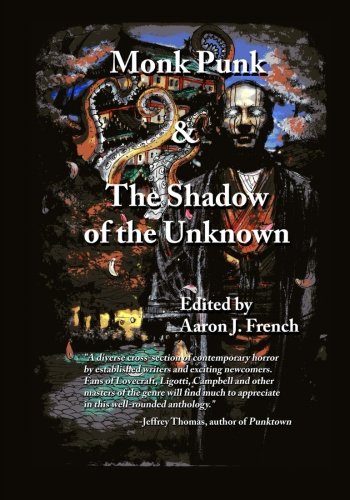